Have you often been without canned cream of chicken soup for a recipe?

I actually prefer it to the canned stuff because it has more flavor.

We’ve also used it as a chicken gravy — which I highly recommend!

Ingredients for Cream of Chicken Soup

My mother has found the trigger to her migraines is caused by MSG and the canned version contains high enough levels that she can’t eat it.

This homemade version has no added MSG.

Is cream of chicken soup gluten-free?

This version is not gluten-free because it uses all-purpose flour.

Wheat can also be present in chicken broth and bouillon cubes, which also means gluten is present in them.

How to Make It

Bring chicken broth and milk to a boil in a small saucepan.

Reduce to a simmer and whisk in flour, breaking up any lumps. Add salt and pepper and continue stirring for 1 minute.

If having any troubles breaking up lumps, use an immersion blender or a food processor to blend.

Remove from the stove and allow to slightly cool. The soup will continue to thicken as it cools.

Out of Chicken Broth?

If using bouillon cubes, only salt the soup to taste to avoid being too salty.

Can you freeze cream of chicken soup?

Cream of chicken soups can be tricky to thaw due to separation and wateriness.

To properly freeze, allow the soup to fully cool to room temperature after cooking.

Then, place in an airtight container with about 1″ of room at the top to allow space for expansion during the freezing process. Freeze for up to 3 months for best quality.

To properly thaw, set in the refrigerator overnight. Heat the soup over a low-heat on the stove-top, whisking often to avoid separation.

What to make with cream of chicken soup? 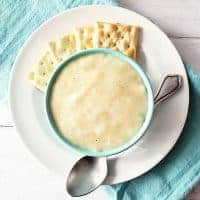 Try these other delicious soup recipes!

This website uses cookies to improve your experience while you navigate through the website. Out of these cookies, the cookies that are categorized as necessary are stored on your browser as they are essential for the working of basic functionalities of the website. We also use third-party cookies that help us analyze and understand how you use this website. These cookies will be stored in your browser only with your consent. You also have the option to opt-out of these cookies. But opting out of some of these cookies may have an effect on your browsing experience.
Necessary Always Enabled
Necessary cookies are absolutely essential for the website to function properly. This category only includes cookies that ensures basic functionalities and security features of the website. These cookies do not store any personal information.
Non-necessary
Any cookies that may not be particularly necessary for the website to function and is used specifically to collect user personal data via analytics, ads, other embedded contents are termed as non-necessary cookies. It is mandatory to procure user consent prior to running these cookies on your website.
SAVE & ACCEPT
684 shares