This creamy loaded potato soup recipe is filled with sauteed celery & onion, potatoes, a creamy potato base, and topped with bacon, cheese, and chives.

This recipe is just like a loaded baked potato so it’s best to top it with bacon, cheese, and chopped chives. The cheese will begin to melt to make it extra delicious and gooey.

How to Make the Soup Creamy

I always wondered how chefs get soup so creamy yet thick, and then I realized they’re blending some of the potatoes, but not all of it.

This allows for a thicker soup that holds the creamy potato flavor through every bite.

I also add half & half to my soup to give it a creaminess. Half & half is half whole milk and half cream.

If you are like me and often forget this at the store you can make a substitute half & half right at home.

Can you freeze potato soup?

You can, but it’s best not to. Both potatoes and milk products like half & half become watery and grainy after they are frozen and later thawed.

How long does potato soup last in the refrigerator?

Potato soup can be safely stored in the refrigerator for 3-4 days.

Try these other delicious soups!

This creamy loaded potato soup has diced celery, onion, potatoes, a creamy base, and topped with bacon, cheese, and chives. 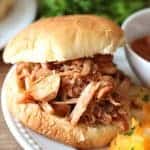 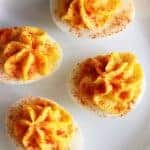