In the simplest terms, gumbo is a spicy, flavorful stew of meats and vegetables. Gumbo has had a variety of different types since the early 1800’s when it originated in Louisiana.

You may see a mix of any meats in it — chicken, crab, oysters, sausage, shrimp, ham, bacon, or beef. A variety of vegetables are also used.

Another main difference you’ll see is some gumbo recipes, some cooks use filé and others use dried okra to thicken the soup.

It’s believed that filé was originally only used when okra was not in season, however, many use this as a regular ingredient in their gumbo.

What is gumbo filé?

Filé is a spicy herb made of dried and ground leaves from sassafras trees. It’s used in gumbo as a thickener, to give flavor, and typically added after gumbo has cooked as the final touch.

In more recent years, browned flour has also been added to gumbo. Browned flour is achieved by making a roux of melted butter and/or oil and flour and allowing it to cook until browned.

This is another way to thicken gumbo and add a rich taste to the soup. This recipe calls for TWO roux to be made.

I recently watched an episode from season 16 Top Chef where Chef Kelsey from Alabama made a gumbo with two roux – one cooked a little longer than the other.

It was so creative and sounded so delicious!

For my own gumbo I decided to up the flavor and try a double-roux too. When making a roux for gumbo it’s important to have the same amount of fat to flour ratio.

With so many different versions and varieties, I came up with my own gumbo recipe that I knew my family would like. And don’t forget the cheddar bay biscuits!

Looking for a side to go with gumbo?

I’m very partial to cornbread with gumbo and The Food Charlatan’s sweet and moist honey cornbread is my favorite! The honey caramelizes in the cast-iron skillet and almost has a caramel flavor.

You must try the recipe, and if you do, follow the directions exactly. It turns out so darn delicious! (You can see cubes of the honey cornbread in all of my photos.)

Try these other great soups and stews! 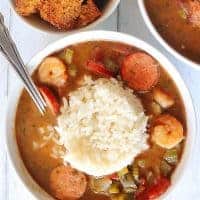 This website uses cookies to improve your experience while you navigate through the website. Out of these cookies, the cookies that are categorized as necessary are stored on your browser as they are essential for the working of basic functionalities of the website. We also use third-party cookies that help us analyze and understand how you use this website. These cookies will be stored in your browser only with your consent. You also have the option to opt-out of these cookies. But opting out of some of these cookies may have an effect on your browsing experience.
Necessary Always Enabled
Necessary cookies are absolutely essential for the website to function properly. This category only includes cookies that ensures basic functionalities and security features of the website. These cookies do not store any personal information.
Non-necessary
Any cookies that may not be particularly necessary for the website to function and is used specifically to collect user personal data via analytics, ads, other embedded contents are termed as non-necessary cookies. It is mandatory to procure user consent prior to running these cookies on your website.
SAVE & ACCEPT
514 shares