Cinnamon chicken strips are a family favorite for weeknight dinners. Chicken tenders are dipped in egg before the cinnamon and spice crispy coating is pan-fried to a rich golden brown.

You can find fried chicken in almost every culture around the world but I have to say that American fried chicken recipes are among the most famous. Maybe it’s that extra crunch that sets us apart or maybe the secret lies in the egg wash or buttermilk soak.

The special ingredient in this homemade fried chicken tenders recipe is cinnamon. It is a less common savory ingredient these days but maybe we should bring it back.

I can distinctly remember walking into my grandmother’s kitchen and the aroma of both cinnamon and fried chicken wafting around me. It doesn’t matter how much you have already eaten that day, that scent makes you salivate.

I am so happy that I can recreate that nostalgic feeling with just a few basic pantry ingredients and a skillet. If you are still looking for chicken skillet recipes, try these cinnamon fried chicken strips.

How to Make Cinnamon Chicken Strips Like Grandma Did

Every grandmother has a few tricks up her sleeve to make regular ingredients taste amazing. All I can say is that my gran made pan-fried chicken tenders with love, and lots of it. So, what were her secrets?

Most of us have tried buttermilk fried chicken and can’t do anything but admit that it is divine. But, how often do you actually have buttermilk in the fridge?

That is why I swapped out the buttermilk for a mixture of eggs and regular milk. Even without soaking overnight, the dash of milk keeps the chicken strips tender and moist throughout.

Don’t be afraid to see specks of color in your flour. The more spice, the more flavor. And let’s be honest, the crispy skin is the best part of fried chicken.

Bring out your spice rack anytime you coat chicken with flour. It makes all the difference with just a few cents more of your budget.

Pan Fry in a Skillet

Put aside your non-stick pan because you really need the high heat that only a cast iron skillet can handle. Don’t put it in the oven either because we are making fried chicken without breadcrumbs.

Frying these chicken tenders in a skillet gives you much crispier skin. If your skillet is seasoned and greased enough, the skin won’t stick to the bottom.

Use of Cinnamon Powder in Cooking

What dish do you think of first when you hear the word cinnamon? My guess is apple pie or pumpkin pie. Come fall and we are all ordering pumpkin spice lattes.

The sweet earthy flavor of cinnamon is a wonderful addition to baked goods and hot milk drinks but that is not all it is good for. There are plenty of savory dishes that cinnamon can add another dimension to.

Adding cinnamon to meats dates back to its very origins. The use of cinnamon goes back thousands of years, as far back as the Egyptians. People discovered its preserving qualities and used cinnamon powder as a way to keep meat fresh for longer.

In more modern times, you can find cinnamon as an ingredient in roasts, beef or pork stews, and curries. It is a staple in many Middle Eastern and North African dishes but also in popular spice blends such as garam masala, Chinese five-spice, and Jamaican jerk. Also, let’s not forget the famous roast chicken in the cinnamon sauce from Little House on the Prairie.

Knowing its wide use in savory meals and sauces, cinnamon on chicken doesn’t seem so out of left field, does it? If you’re still feeling a little apprehensive, try adding just a half or even quarter tablespoon to the first batch. Taste it and adjust it to your liking.

What to Serve with Homemade Fried Chicken Tenders

I could eat these cinnamon fried chicken tenders just on their own. They are that good! But of course, you can easily create a full family meal out of them.

This time I went the classic route of creamy mashed potatoes and greens. I like the variety in textures that you can find with each bite. Any greens work so use up whatever is in season and on hand.

You could just as easily serve the chicken tenders with french fries, oven-roasted baby potatoes, or even brown rice. If you do go for the rice, I recommend collard greens or other sauteed vegetables that can add some moisture to the rice.

These chicken tenders are also absolutely perfect for a fried chicken sandwich the next day. If the skin has lost some of its crunch overnight, leave it in the oven for a few minutes before assembling your sandwich.

This is also a good recipe for party food. Serve with my garlic and lemon aioli dip for extra richness or simply serve with ketchup for a kid’s birthday party. The platter will have disappeared within minutes.

My grandmother’s cinnamon chicken recipe doesn’t call for many ingredients so there isn’t much to swap out. The only thing that you might want to do is replace the regular flour with a gluten-free alternative.

The best gluten-free flour for frying is a hot debate and I’m still experimenting myself. You can try switching it out with corn starch or tapioca flour, both are known to give a good crunch.

Put this on your list of easy chicken recipes for dinner for families. Cinnamon pan-fried chicken tenders are a crowd favorite that comes together in just half an hour. I learned this recipe from my grandmother but I would love to hear how yours made fried chicken. Let me know in the comments below. 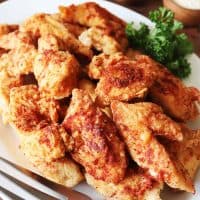 This website uses cookies to improve your experience while you navigate through the website. Out of these cookies, the cookies that are categorized as necessary are stored on your browser as they are essential for the working of basic functionalities of the website. We also use third-party cookies that help us analyze and understand how you use this website. These cookies will be stored in your browser only with your consent. You also have the option to opt-out of these cookies. But opting out of some of these cookies may have an effect on your browsing experience.
Necessary Always Enabled
Necessary cookies are absolutely essential for the website to function properly. This category only includes cookies that ensures basic functionalities and security features of the website. These cookies do not store any personal information.
Non-necessary
Any cookies that may not be particularly necessary for the website to function and is used specifically to collect user personal data via analytics, ads, other embedded contents are termed as non-necessary cookies. It is mandatory to procure user consent prior to running these cookies on your website.
SAVE & ACCEPT
25 shares