Instant Pot BBQ pulled pork that is tender and pulls apart as if it has been slow-cooked all day, but the time is cut down to under 2 hours with only 4 ingredients! Serve with BBQ sauce on a bun or eat it as-is with a side of baked beans or cheesy potatoes.

Pulled pork is so quick and easy to make in an Instant Pot compared to slow-cooking for 8 hours in a crock pot.

I’ll never go back to slow cooking because the Instant Pot gives the exact same great taste and is so tender but in a quarter of the time!

I’ve mentioned these before and I’ll recommend them again. These Bear Paws are amazing for shredding meat!

They’re designed like bear claws (and we know bears can do some damage!) so that you can tear apart meat quickly and easily.

While pork shoulder is the traditional cut used to make pulled pork, you can also use a 4-pound pork butt with the same directions.

I have also cooked with 2 pounds boneless pork ribs before. I picked it up on my way to work for a potluck we were having and needed pork that was sliced already.

If you have that on hand, follow the directions, but cook it for 25 minutes and quick release for 10 minutes.

Can you freeze pulled pork?

Yes! We do this all the time. It’s so easy to buy a huge pork shoulder, cook it, and freeze it so that you can have it later.

Be sure that the pulled pork is fully cooled after cooking in the Instant Pot.

I recommend storing the pork in small packages (like quart-sized Ziploc baggies with as much air removed as possible) so that you can take out what you need for meals down the road.

When it’s frozen in a big chunk it’s hard to pull apart until it’s fully thawed.

Store cooked pork in an airtight container in the freezer for up to 2-3 months.

When you’re ready to eat, thaw it overnight in the fridge or defrost it in a microwave-safe container in the microwave, being sure to rotate it so that it thaws evenly and doesn’t begin cooking hot spots further.

Instant Pot BBQ pulled pork that is tender and pulls apart as if it has been slow-cooked all day, but the time is cut down to under 2 hours with only 4 ingredients! Serve with BBQ sauce on a bun or eat it as-is with a side of baked beans or cheesy potatoes. 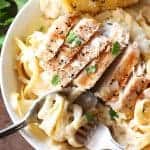 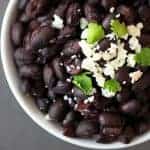