This is a recipe for slow cooker ham with pineapple juice, brown sugar, red wine, and honey. It turns out tender and juicy with lots of flavor. I will show you how to cook spiral ham without drying it out!

Ham is my favorite main dish for Thanksgiving and Easter. It comes out with more flavor than a turkey or roasted chicken. But I prefer it to be a sweeter Crockpot ham with pineapple juice, brown sugar, honey, and red wine.

It turns the juice into a tasty glaze for the ham and it’s so tender when it’s slow-cooked. The flavors are absorbed into the slices of ham and it turns out really juicy!

The ham for this recipe has been cured and precooked prior to placing it in the slow cooker.

If your ham says “fresh ham” it is likely not cured or cooked. An uncooked ham needs to reach an internal temperature of 145 degrees Fahrenheit during the cooking process in order to be safe for eating.

A ham that is pre-cooked simply needs to be heated through to the center, but in this recipe we also want it to be very tender so that the meat falls off the bone.

While this is a recipe for sliced ham, an unsliced one can be used as well. The flavors do not get a chance to really penetrate the inside of the ham, however.

Be sure that you have a Crockpot or slow cooker large enough to hold an 8-10 pound ham. I used a 6-quart crockpot for this recipe.

I’ve also tested this recipe in a Ninja Foodi 8-quart 9-in-1 and a 6-quart Instant Pot, using the slow cooker setting on both of them. It worked perfectly in both of these appliances. I placed the lids on and left the vent open while cooking for the same times listed in the recipe card below.

How to Make Slow Cooker Ham with Pineapple

It’s really easy to put together!

Best Side Dishes for Ham

How long does cooked ham last in the refrigerator?

It can last 3-4 days in the refrigerator.

For freezing, it can be kept in an airtight container for up to 3-4 months.

How to Reheat Cooked Ham

Use a roasting pan with a rack and add water to the bottom of the pan to prevent drying out. Place the ham in the roasting pan on the rack and cover it with aluminum foil to retain the moisture inside. Bake in the oven at 300 degrees Fahrenheit for 10 minutes per pound of ham. 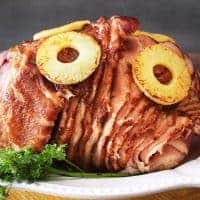 This website uses cookies to improve your experience while you navigate through the website. Out of these cookies, the cookies that are categorized as necessary are stored on your browser as they are essential for the working of basic functionalities of the website. We also use third-party cookies that help us analyze and understand how you use this website. These cookies will be stored in your browser only with your consent. You also have the option to opt-out of these cookies. But opting out of some of these cookies may have an effect on your browsing experience.
Necessary Always Enabled
Necessary cookies are absolutely essential for the website to function properly. This category only includes cookies that ensures basic functionalities and security features of the website. These cookies do not store any personal information.
Non-necessary
Any cookies that may not be particularly necessary for the website to function and is used specifically to collect user personal data via analytics, ads, other embedded contents are termed as non-necessary cookies. It is mandatory to procure user consent prior to running these cookies on your website.
SAVE & ACCEPT
451 shares