This is a recipe for Mexican Street Corn in a Cup (esquites) with whole kernel sweet corn, mayonnaise, and sprinkled with chili powder, cotija cheese, and tortilla strips served in a bowl or cup. Can be served as a main dish or side.

Mexican street corn in a cup is a twist on the traditional dish that is usually served on the cob after being grilled. The grilled on-the-cob version is called elote in Spanish, which means “corn.”

Esquites is the off-the-cob version served as a salad in a bowl.

Esquites are also typically boiled in a large pot, sometimes with a broth. They’re served with chopped onion, fried green chile, chicken, and then topped with lime juice and mayo or sour cream, cotija, chile, and salt.

Both elote and esquites are Mexican street-fare that have become popular and trendy all over the world.

Here in Iowa, it is served at the Iowa State Fair at the Corn Stand where you can find a variety of corn in a cup versions:

How do you make Mexican street corn in a cup?

Mexican Street Corn in a Cup

Mexican Street Corn in a Cup with whole kernel sweet corn, mayonnaise, and sprinkled with chili powder, cotija cheese, and tortilla strips served in a bowl or cup. Can be served as a main dish or side. 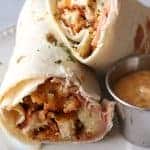 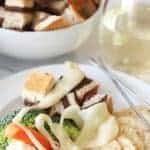